A dated line drawing of two children stealing cookies behind their mother's back is being used by an artificial intelligence system to detect the onset of Alzheimer's disease. 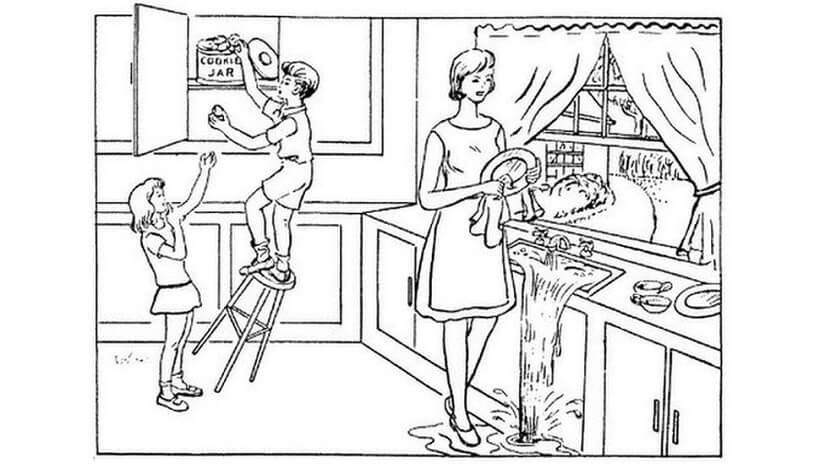 The system uses voice samples of people describing the scene to predict whether healthy people may get the disease.

It could predict onset seven years earlier than human doctors with 70% accuracy.

The UK's Alzheimer's Society said the research was encouraging.

Fiona Carragher, director of Research at the Alzheimer's Society, said: "Getting a dementia diagnosis in good time is critical to living well with the condition.

"Sadly, it's often a long road that delays access for people with dementia to the right treatment, support and guidance - yet existing treatments are more effective the earlier people receive them, and potential new treatments could also be more effective in the early stages or even before symptoms appear.

"This is an exciting further step in the use of artificial intelligence and language to get much earlier and more accurate diagnoses - though we need to see these methods tested further in larger, diverse groups of people.

"We desperately need more research of this kind, given Alzheimer's disease causes brain changes up to 15 years before symptoms show."

Alzheimer's damages the memory and other cognitive abilities by destroying connections between nerve cells in the brain.

In the US alone, it is estimated that up to 5.5 million people are living with the disease, with some studies suggesting that it is the third leading cause of death behind heart disease and cancer.

The AI model, developed by IBM Research and pharmaceutical giant Pfizer, uses natural language processing to analyse short excerpts of speech taken from the Cookie Theft cognitive test. The test, used for many years in the diagnosis of dementia and other cognitive illnesses, asks people to describe what they see in the picture.

The AI spotted subtle changes to language, such as grammatical errors and different sentence structure, which indicate cognitive decline.

The samples used by IBM came from The Framingham Heart Study, a US research project into 5,000 people and their families that has been ongoing since 1948.

Because of the long-running nature of the study, the AI was able to analyse samples collected while people were cognitively healthy. And, if the model analysed a speech sample from one of the participants at the age of 65 and predicted that he or she would develop Alzheimer's by the age of 85, that could be checked to see how accurate it was.

"The key finding is that seven years in advance of clinical diagnosis, we can say with 70% accuracy that people will go on to develop Alzheimer's," explained Ajay Royyuru, IBM's vice-president of Healthcare Research.

Although there is currently no known cure for the disease, knowing who might develop it could help with treatments, he told the BBC.

"Even if you cannot change the course of the disease you can prepare, you can manage your life better."

Mr Ajay acknowledged that not every patient would want to know, though.

"This has to be done with a strong ethical construct, individuals have to give consent to markers being used and if you chose to participate you will find out. You don't get to find out unless you give consent."

But in future he hopes that AI systems can help doctors understand the role bio-markers such voice can play in diagnosis and predictive medicine.

"We believe AI is a means of augmenting this process, it is just another indicator for a trained practitioner and it will not be AI giving the diagnosis."